A Little About Beer

After we made the decision to cover beer-centered places like breweries and ale houses in addition to our usual piles of hot wings at all the local dives we have visited some pretty great places and enjoyed quite a few incredible beers. From local favorites at Four Peaks to some really high quality stuff from Angel Trumpet, we have had a good run of it so far. I think we [read: Xavvi] have a good knack from finding interesting local places to get some great local and craft beers. If anything has been lacking in our write-ups so far it may be a deeper understanding of what makes a great beer great.

I do feel like we have a pretty taste for good, high quality beers but we aren’t great at explaining why they are good or describing their taste in any extensive detail. So far, we have covered up for any gaps in our knowledge with heavy use of subjective opinions and spending a lot of time describing the places overall instead of focusing only on the beers.

Still, while we have been lucky enough to visit some really cool places to grab some brews and share the experiences with you guys I figured it would still be nice to get a little better understanding of beer in general and some of the specific styles we have come across frequently. Maybe we could even start sounding like we half-way know what we are talking about. I mean, this certainly isn’t going to make me a beer scholar overnight or anything but I think it helps that we are putting in the effort to better our beer knowledge.

I did a quick search about beer and found some pretty interesting facts. Beer may actually be the world’s oldest fermented beverage. As the story goes, Adam would get wasted and walk around the Garden of Eden trying to score with Eve. (*May not be historically or biblically accurate).

Well, it may not be that old but some of humanity’s earliest known writings were specifically about beer including the Code of Hummurabi, which was laws regulating beer and ancients bars, and The Hymn to Ninkasi, a prayer to a Mesopotamian goddess of beer and a way to remember their recipe. Wait a minute! There is a Mesopotamian goddess of beer? And her prayers are used for making beer? Holy shit, I think I may have just converted. What is her affiliation with hot wings?

Sorry, let me get back on track. I also found out that beer is the most popular alcoholic beverage in the world, which is not too surprising. I feel like it has something for everyone. From the downtrodden blue-collar worker just in need something to take the edge off in his downtime to the stuffy beer snob, beer is pretty universal. It also happens to be the third most popular beverage in the world behind only water and tea. Suck it, New Coke.

Not really relevant to the surrounding text but I think I need an otter. They seem very useful. Preferably one with better taste though.

Not too shabby for something we tried to use to purge the memory of Steve Nash going to the Lakers.

When it came to choosing the styles of beer I wanted to feature in this article I wanted to stick with ones we had seen a lot of or we have seen brewed locally. There really wasn’t much of a scientific method for coming up with this list. Mostly, I looked up a list of styles online and picked out the ones that sounded the most familiar.

Notice the fairly overt piss coloring.

If you are like most of us, this style beer was your first introduction to beer. This is the style brewed by mega breweries like Budweiser and Miller. It is characterized by its pale color, low bitterness, and really, low flavor. I am not sure if this style beer can be done well or not but the Major Breweries have really left a bad taste in our mouths regarding it. Both literally and figuretively. Budweiser has to be the most well known example. I don’t know any local or craft examples of this style.

This beer is, not suprisingly, amber and red colored ale with an emphasis on the malt flavor. The hops are at varying levels. From what I understand, this is not quite as strongly defined as some of the other styles and can actually vary quite a bit. Oak Creek Amber is a locally made example of this beer that I have enjoyed recently.

They really wanted to make sure you knew this was AMERICAN Pale Ale.

We have seen a ton of these in our wing and beer adventures. They typically range from a gold color to more of an amber. The American version of the Pale Ale generally has more bitter, hoppy flavor then the English variety. It has a mild fruitiness and a balanced malt and hop taste. They usually do not exceed 5.5% abv. Devil’s Ale from SanTan Brewing is an example of this type of beer.

Hefeweizens and other wheat beers are known for this cloudy look.

Hefeweizen is a wheat beer (weizen means wheat) originating from Germany. They are a lighter colored beer with a crisp, refreshing taste. They are usually highly carbonated. I have never been big on Hefeweizens myself but I know plenty of people who like them and you find them everywhere. Oak Creek in Sedona makes a beer called Hefeweizen that is, you guessed it, this style. American Wheat Beer is very similar to this style and is the style of the popular Blue Moon.

India Pale Ale did not actually originate in India but rather in England. It was actually just exported to India when the British were all over that shit before Ghandi swooped in, guns-blazin’, and kicked them all out. They traditionally were heavy on the hops because that was a natural preservative. Nowadays, the strong hops flavor is just part of the style. The American IPAs are generally even stronger on the hop flavor. Four Peaks’ Hop Knot is a great tasting example of this beer. 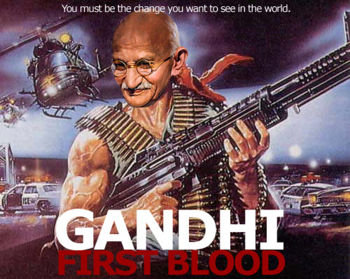 I can’t believe I found this. I don’t know who originally created this but I would be happy to give you credit.

Look at the beautiful… beer.

You see this beer everywhere at one particular part of the year. Seems every brewery has this as a seasonal style. This is the only lager on the list (the rest being ales) and originates in Germany. It is usually a dark copper color with a full-bodied taste. I hear there is nothing to compare to having a bunch of these at Oktoberfest in Germany and I think I would like to test that out for myself. You know, for science. Pretty much every brewery has an example of this when Oktoberfest rolls around.

There is a prize at the bottom. It’s being drunk!

Stouts are those black beers that just look like they were made to get you wasted. Guinness is by far the most well known example. Funny story though, Guinness has less alcohol by volume than Budweiser. That is weird to imagine. Stouts are characterized by their dark color and roasted flavor, usually barley. This is a great style of beer but takes some time to develop a taste for for most folks. Four Peaks’ Outmeal Stout is an excellent example of a sub-type of this beer.

So, as you can see beer has a long and glorious history, as well it should considering it is the best beverage known to man. In fact I think I am done because I am going to go grab a beer and give thanks to Ninkasi, Sumerian matron goddess of beer. Peace!