We heard a lot about Rehab Burger Therapy. It didn’t take long after they opened for people to start talking about it. They had a reputation for excellent burgers and people couldn’t shut up about something on the menu called Pig Wings. When we heard that they were also owned by the same people who owned Oregano’s – another place on our list and a very popular local chain – we immediately had our expectation of great service and good food.

We decided to cheat and picked it for our next hot wing outing – instead of waiting for it to come up with the random thing picker we usually use – so we could see what the big deal is.

We met up at Rehab after work. As soon as I got out of my car I could smell the scent of burgers surrounding the place. It permeated the whole parking lot. It smelled incredible. I was excited to get inside and see this place for myself.

It was everything I could have hoped for.

Xavvi was already waiting for me when I arrived. He was happy to inform me that Thursday is All-Day Happy Hour (Thirsty Thursdays). That meant discounts on beer and all appetizers. Couldn’t have asked for better. I settled in and ordered a Four Peaks 8th Street that they had on tap.

Xavvi had already been talking to our server about the menu a little bit and the server caught me up to speed after bringing out my beer as well. He suggested the Medium sauce (they don’t have a Hot flavor) because they make it in-house and it was supposed to be really good. He said the Gold Medal Sauce was good as well. He also mentioned that the Pig Wings were great.

We settled on an order of the Medium wings with a side of the Gold Medal Sauce and an order of the Pig Wings. We wanted to see what all the fuss was about. He warned us that the wings take a little longer than some places because they cook them up fresh. That was just what we wanted to hear.

While we waited for the food to come out we saw servers going by with all kinds of burgers and food. Nothing that came out of that kitchen looked anything less than amazing. I was almost ready to just snatch one of those burgers off the plate and dive in but I reminded myself that I am an adult and am expected to have at least some self-control so I let them go by and waited patiently for my own food. Our server kept the beers coming in the meantime. 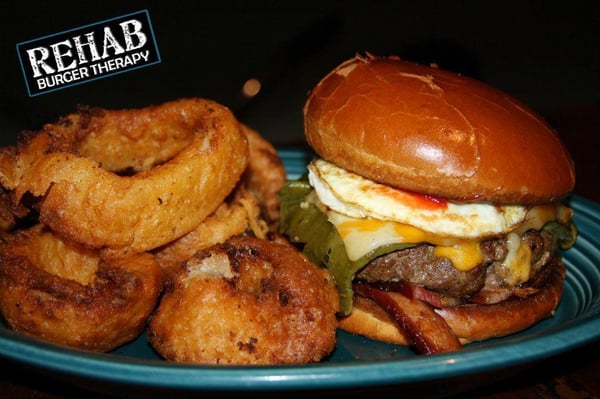 The Hangover Burger. God, I want one. Photo Credit: Yelp

The food came out soon enough. It didn’t seem like enough time had passed that it would warrant a warning about the wing cook time but I guess people are just really impatient about their wings. All of the food looked great and we were happy to see that the apparent quality of the food didn’t stop with the burgers.

The Medium wings and the Pig Wings.

The Medium wings looked to be well cooked and decently sized. Not as big as many we have seen, but definitely big enough that we weren’t disappointed. They were evenly covered in the traditional looking sauce. They were served with carrots, ranch, and our side of Gold Medal sauce that was a shade lighter than the Medium sauce.

The Pig Wings looked exactly as advertised on the menu: Pork on a Stick. Basically, they were chunks of pork with the bone sticking out so they slightly resembled the shape of a hot wing. They looked really tasty covered in their Spicy Peach BBQ sauce.

I snapped a few pictures with my phone quickly before we dived in. Xavvi’s phone had some battery issue so it would die everytime he tried to get a picture so that is the problem if the pictures are not up to their usual standard.

The Medium wings with Gold Medal sauce on the side.

The Medium wings were very good. Nothing groundbreaking here, but no real weaknesses either. The sauce was very, very good. It was a very traditional sauce but it did seem like a little extra time went into the preparing of it. They had something strange going on where the ends of the wings seemed to be more cooked than the middle, so they had a different texture. Wasn’t much of a problem as neither portion seemed poorly cooked, just different.

We dipped our second wings in the Gold Medal sauce. There was a distinct mustard taste to that sauce. It also had a freshly prepared taste to it that I really appreciated but I just don’t think that sauce appeals to my particular tastes. I preferred the regular Medium sauce.

Xavvi seems pretty content with his beer and Pig Wing.

The Medium wings were definitely a step above your average wings and the sauce is a big part of it but there was still not a whole lot setting them apart enough to get to that next level. Next up were the Pig Wings.

I don’t know what kind of mutant pig has wings but they are delicious.

The Pig Wings may look a little like wings but they certainly didn’t taste that way. They tasted like BBQ ribs. Really, really, really good BBQ ribs. Seriously, I don’t think I have had ribs that tasted as good as those Pig Wings. They were amazing. The sauce was superb. There was nothing about it that we didn’t like.

Still, despite what they are named, they were not wings, so while we will rave about those things to anybody who asks, it isn’t going to boost their ranking on our Rankings page. You should still order some just don’t expect a hot wing experience.

After we finished our chicken and our pork we hung out a while to enjoy another beer. Our server tried to tempt us with a burger to split or some milkshakes and we were definitely tempted. If I wasn’t full I would have jumped at the opportunity to try one of those burgers. Instead I will just have to go back sometime to get it. [Editor’s Note:  We also would have looked a bit gay, two portly guys in a corner splitting burgers and milkshakes in Scottsdale.  Not that either of us give too much of a rainbow-fuck, but still…]

Normally, a milkshake wouldn’t tempt me after a meal of wings but after seeing the care they put into everything else I wanted to try it. A really well-made milkshake is a thing of beauty. In the end we had to say no if for no other reason than we are trying to put together a fitness/nutrition/quit-being-so-fat blog at the moment also and that wouldn’t help the cause. 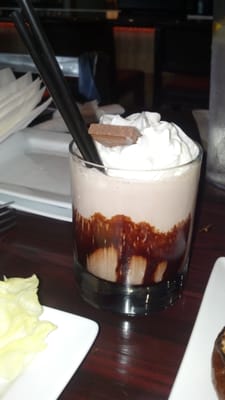 “A tasting of the Chocolate Lava Milkshake!” Yep, going to have to go back for one of those too. Photo Credit: Yelp

After Rehab Burger Therapy we headed down to downtown Chandler to hit up the usual spots. We grabbed some beers at San Tan Brewery; we checked out a new bar that had no sign yet, no beer specials on Thursdays, and food that was too expensive – we didn’t stay there long; we finished up the night at Coach & Willies; and I made fun of some douchebags while I was drunk. So, pretty typical after-wings night.

Mmhmmm.  Oh yeah.  Yeah, that’s it.  That’s the stuff.    …hmm? Oh, sorry, didn’t see you there, I was too busy orgasming mightily over the quality of food and service at Rehab.  I had gone there not even two days prior to eat a burger with my she-thug non-man companion (read:  wife) and was in burger heaven.  Convincing Tyler to go there two days later wasn’t a problem, and I don’t think it’d be too tough to convince him to go back either.

While the wings aren’t STELLAR, they’re good and definitely better than a lot of other places.  You can tell this isn’t an afterthought for their menu, they take time to craft their own sauces and there’s no par-frying of the wings beforehand.  And while the Pig Wings aren’t wings, they were so good that it’s hard not to give them props for even making them in the first place.